News publications don’t often shy away from the topic of technology being detrimental to mental health. However, 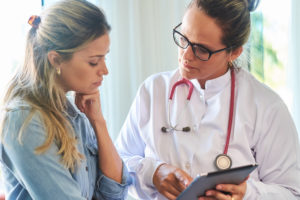 there are an increasing number of benefits stemming from technology that could help those in the midst of mental illness.

One such benefit is early identification of depression or anxiety. An article published in Australian Doctor Magazine on May 5, 2017, reported about how 10 GP clinics in Sydney used iPads in waiting rooms to screen patients for anxiety and depressive symptoms.

The article explained that when patients initially entered the medical waiting rooms, they were given an iPad with a questionnaire to complete. The results were then sent to their GP, who could use the data to address their symptoms and provide management options.

Australian Doctor reported that “more than 80 per cent of the 35 GPs who used the model thought it helped them identify patients with mental illness and 90 per cent thought the scheme was feasible in their practice” (Worsley, 2017, p.4).

Researchers from the Black Dog Institute have also praised the concept, citing it could pick up on patients at risk of mental illness and therefore help them seek treatment.

Options for treatment are also evolving. Orygen, The National Centre of Excellence in Youth Mental Health, Melbourne, and King’s College, London, are undertaking separate studies regarding the inclusion of virtual reality (VR) in treatment of depression and psychosis.

One aspect of the VR study is helping participants grasp the concept of mindfulness, a method used for coping with negative thoughts. In The Australia Financial Review’s article [April 7, 2017] about the study, they described how participants “will enter a virtual world where avatars do things designed to trigger classic depressive thinking.

“But instead of being consumed by self-hatred, participants will select their thought from a pop-up menu, perhaps “they don’t like me”, and have it enter the virtual world in a bubble.”

The researchers involved in the study hope that visualisation will allow participants to address these thoughts in real time.

To read more about the study, head to http://www.afr.com/lifestyle/virtual-reality-finds-a-new-use-in-conquering-depression-20170404-gvdgrb