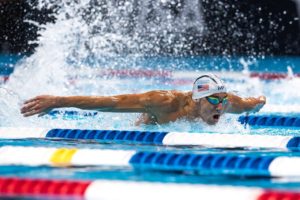 In June, 2017, Olympic superstar, Michael Phelps opened up about his own battle with depression, after he decided to leave the sport in 2012. Image Credit – Aqua Sphere

Reading the news lately, it seems many of our elite athletes are living with clinical depression.

Throughout 2017, we’ve heard from athletes including Ian Thorpe, who has been open about his battle with depression for some time now, as well as Indigenous Rugby League star, Greg Inglis, who checked himself into a mental health clinic in May, due to his clinical depression. And more tragically, we mourn the death of Wallabies great, Dan Vickerman, who took his own life at the age of 37, in February, following a battle with depression.

It’s not only Australian sports stars who have battled depression, but elite athletes from all over the world.

In 2014, megastar, and WWE champion, Dwayne “The Rock” Johnson revealed he had lived with depression for many years, during which he had experienced three severe depressive episodes. He acknowledged that his depression could return at any time.

While English cricket star, Freddie Flintoff, who was a major player in the 2005 Ashes victory, in which England beat Australia, shared his struggles with depression in 2015.

On June 5, 2017, the world’s most decorated Olympian, and mental health advocate, Michael Phelps, opened up about his battle with depression, after choosing to leave swimming in 2012, while accepting an appointment to the Medibio Board of Directors – an ASX listed medical device company that has developed an effective, objective test to help with the diagnosis of depression, chronic stress and other mental health disorders.

Speaking with the Daily Telegraph in June, Phelps said the hardest thing for him was to ask for help.

“It was good for me to understand it’s okay to not be okay. For me it was hard to put my hand out and ask for help. That’s the one thing that probably singlehandedly changed my life and saved my life.

“If we can get out and figure out some solutions to be able to change someone’s life then that’s something that’s extremely exciting for me,” said Phelps.

These are just a few of the countless elite sports people who have been plagued by clinical depression, which begs the question as to why do elite athletes develop this potentially devastating mental illness.

There has been substantial research conducted around depression in elite athletes, and we will only scratch the surface of the discussion here.

Although there is plenty of research and knowledge about depression, its prevalence and treatment, a great deal remains unknown about why elite athletes are developing the illness.

Historically, involvement in sport has been identified as positive and beneficial for self-esteem, anxiety and stress, among other things.

Furthermore, there has recently been a growing interest in literature demonstrating how sport can improve the symptoms of mental illness and increase general mental health and wellbeing, with a clear focus on depression.

In the January, 2017 research paper from the Institute for Quality and Efficiency in Health Care, entitled, Depression: Can sports and exercise help?, researchers wrote, “Sports and exercise can help to relieve the symptoms of depression. It is not clear whether particular forms of exercise are more suitable than others.

Although they were unable to determine the level to which exercise helped in depression, the researchers did determine that participating in exercise and sport reduced the symptoms of depression.

So, why are elite athletes experiencing and acknowledging their depressive episodes, symptoms and other stress-related illnesses?

In truth, a lot remains unknown; one question that requires further exploration is, can depression stem from sport itself?

According to Sports Psychologist, Sophie Walton, English Institute of Sport, Southampton, some research suggests that the heightened stress factors, such as career termination, being dropped from a team or roster, injury, relocation, or even the heightened stress of being promoted to team captain (or the equivalent) could all combine to act as a trigger for depression.

“Recent research suggests this can in fact, be the case. For example, a high-performance sport in a competitive setting is suggested to cause distress. Furthermore, the likes of post-injury depression can occur after sustained absence due to injury,” Dr Walton said.

Dr Walton maintains athletes are often viewed solely as athletes, rather than regular human beings, which could foster a fear around admission of depression, and subsequently take much longer, and reach a more critical point before they are actually willing to acknowledge they may be living with depression, and to in turn, seek help.

“Another question to consider is; is it simply that elite athletes are human beings after all, and therefore are just as likely as the next best person to acquire depression?

“Sport psychologists today, arguably more than ever, are supporting athletes on issues and concerns outside of the “typical” sport environment. It is imperative as an applied psychologist, to view the athlete as a person, before the athlete. Most importantly, we need to continue to move forward and remove such stigmas attached to mental illnesses, to positively encourage athletes to acknowledge their symptoms, act upon them, and take a step in the right direction toward recovery,” said Dr Walton.

While there may not be a definitive answer as to why depression is so commonplace among elite athletes, Australia Rugby Union COO, Rob Clarke, commenting on the suicide of Daniel Vickerman, reinforced the importance for sporting bodies to be more aware of the mental health battles their members may be facing, and to encourage them to speak up.

“I think it’s something that we, as administrators, need to continue to be ever vigilant on, and the transition from being a professional sportsman into the world after sport can be challenging, and we’ve seen it in a number of sports and we are looking at how we can invest expertise and resources to try and help smooth that transition for all of our players, and I know a lot of the other sports as well,” Mr Clarke said.

If you are living with, or suspect you may be living with clinical depression, or are experiencing negative emotions, or generally feeling down and need help, call Lifeline on 13 11 14, beyondblue on 1300 224 636, or Headspace on 1800 650 890. Alternatively, talk to your doctor, local health professional, or someone you trust today.

To volunteer for, or to learn more about the Australian Genetics of Depression Study, head to https://www.geneticsofdepression.org.au today.