For much of his life, Sean, 29, Melbourne has battled 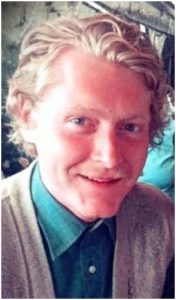 At age 11, Sean, together with his family, undertook a group psychology session, in order to work through the emotional baggage that was crippling their family dynamic.

Despite their best efforts however, by the time Sean celebrated his 13th birthday, his parents had separated.

Sean attributes this relationship breakdown as the catalyst for his depression.

This is his story.

“Depression is like a black dog that follows you around, and needs taming.

“It pulls you away from life, and from where you want to be. It’s a distraction, as well as an artistic motivator, but the illness can also chew you up like a black dog,” said Sean.

Depression has haunted Sean for most of his life. His earliest recollection of depression was at the age of 10 when, at 114 kilograms and struggling with his weight, Sean visited a friend whose father was a GP, and subsequently placed him on the scales to weigh him.

“I remember being conscious of my weight at a very young age, and when my friend’s father weighed me, I realised other people considered my weight to be an issue too, which further heightened my concern.

“My parents were also battling with weight-related issues at the time, both of whom were carrying a lot of emotional baggage. Upon reflection today, my parents were most likely battling depression, which probably contributed to their weight gain,” Sean said.

At 13 years of age while witnessing his family’s breakdown, Sean lost confidence and became extremely fragile.

“I think I learned depressive behaviours from my parents, who were throwing their emotional baggage onto me. As the eldest of three children, I became a filter for my family.

“I think my parents’ separation may have been the catalyst for my depression, because having two sometimes very distraught parents deeply impacted me,” said Sean.

Over time, Sean continued to experience times when he “felt down”, and at 15 years of age he was encouraged by a teacher to speak with the school psychologist.

“When I spoke with the school psychologist at 15 years of age, that was the first time I had sought professional help for my depression,” Sean said.

It wasn’t until six years later however, after experiencing a relationship break-down, that Sean truly recognised he was living with depression.
“At 23 years of age, having just experienced a bad break-up, a close friend recommended I visit a psychologist. This was the second occasion I had seen a psychologist, and it was really helpful.
“The psychologist recognised I needed help, and prescribed me anti-depressant medication and enrolled me into a mental health clinic that ran the ORYGEN Program,” said Sean.

Participating in the ORYGEN Program allowed Sean to manage his mental health, and physical wellbeing to the point at which he chose to discontinue taking his anti-depressant medication following program completion.

“Although I haven’t since seen or spoken to the psychologist who enrolled me into the ORYGEN Program, I owe him a lot, because that program ultimately saved my life,” Sean said.

“When I finished the program, I stopped using the anti-depressant medication, because it was no longer for me.

“The ORYGEN Program helped me to understand my depression, and placed me on the road to recovery, which I’m still on today,” said Sean.

“Although depression has isolated me from my friends, and stolen some of my best years, it’s also heightened my understanding of the human condition.”

Today, Sean is continuing to mount a strong recovery from depression, and is tackling the illness in various ways. He walks as often as he can and has recently taken up jogging. He reads voraciously on the topic and also researches depression online, accessing YouTube videos featuring other people, who too, have battled the black dog.

“The internet has been integral to my recovery process,” Sean said.

Sean is also producing a collection of short stories focusing on both his, and other individuals’, experiences of depression. He hopes that by writing a book, he can help others battling depression to work towards their own recovery.

Sean is participating in the Australian Genetics of Depression study, a ground-breaking international collaboration exploring the genetic risk factors associated with depression, and how genes influence one’s response to treatment. QIMR Berghofer Medical Research Institute is leading the Australian arm of the research study, and Sean genuinely hopes her contribution will allow experts to unravel more answers to help combat depression.

“Anyone living with, or those who have been affected by depression, should participate in the study.

“I think genetics plays an important role in depression, along with the environment. So if experts can predict who is at risk of depression, and wave a red flag on the illness, this may help to stop many people from plunging into a lifetime of unnecessary illness,” said Sean.

“The Australian Genetics of Depression study is absolutely worthwhile.”

Join Sean, and participate in the Australian Genetics of Depression Study today – http://www.geneticsofdepression.org.au/