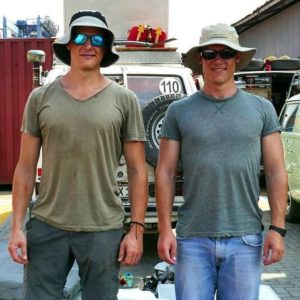 The sole purpose of their extraordinary ride was to raise much-needed funds to support further research into clinical depression – an insidious illness to which they lost their then 27-year-old sister, Heidi, in 2011.

The brothers crossed the finish line at 10:00am today, having raised more than $72,000, with further funds expected to be generated by their homecoming.

Speaking to AAP today, Dylan said both he and his brother completed the trek to do something meaningful to honour their sister’s life.

“We certainly knew we were going to do something outlandish (in her honour),” Dylan said.

“It’s something that started as an Australia to London thing, and just got bigger. By the time we made the commitment (to start), it was round-the-world.”

A QIMR Berghofer Medical Research Institute spokesperson told the Courier Mail that the brother’s herculean effort had set a new benchmark for the not-for-profit organisation.

“This is certainly the longest-running and largest-scale fundraising effort by individuals that we are aware of in the Institute’s history.

“In terms of the money raised, it is one of the largest community fundraising campaigns in the Institute’s history,” the spokesperson said.

Donate to the Brothers Reid cause here, or find out more about their ride at http://www.brothersreid.com/.