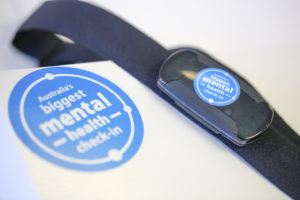 Participants completed an online, subjective measurement of their mental health, and used world-first Medibio wearable technology to generate an objective dashboard score of their mental wellness.

The Check-in revealed 39 per cent of participants were living with depression, another 37 per cent had anxiety disorders, and most worryingly, nine-in-10 participants exhibiting symptoms of a severe mental health illness, were not undergoing, or receiving treatment.

Generation Z participants (aged 18-24) recorded the highest incidence of depression, anxiety and sleep disturbance, and shared the lowest scores of all age categories on trust. Generation Y (25-34 year olds) were the next age group most likely to be living with a mental health illness, while Generation X (those aged 45-54) were the least likely.

Participants were a lot more likely to have experienced depression if reporting high levels of perfectionism, poor sleep, low trust, and social withdrawal as a stress coping mechanism.

Psychologist, founder of Vital Conversations and creator of Australia’s Biggest Mental Health Check-in, Peta Slocombe, Perth, explained life is much harder for many Australian adults than it should be, citing “of all the problems in the world that are unsolvable, mental health is not one of them.”

Ms Slocombe said the Check-in outcomes strongly challenge the use of conventional approaches in managing and treating mental health, such as one-on-one psychological support, GP visits and medication, given their questionable effectiveness, accuracy, and associated time and costs.

“Our results reveal high variability in the traditional identification and management of people living with mental illnesses, and mount a strong argument for change, if we are to turn the tide on what has become the planet’s single biggest disease.”

According to Ms Slocombe, mental health remains heavily stigmatised, and is most commonly addressed only when issues become unavoidable.

“People don’t perceive mental health in the same light as they do a physical illness. Mental illness is a gradual thing – it comes on slowly.

“Our Check-in was designed to make it cheaper, faster and more efficient for people to undertake a mental health check, and to arm participants with appropriate and accurate mental health-related information, and support,” said Ms Slocombe.

The Check-in reinforced the need for earlier intervention in mental health, measuring objective and subjective markers in diagnosis, and more accessible screening programs, to help reduce the nation’s incidence of mental illness.

The use of Australian-developed Medibio-ID technology to generate an objective dashboard of mental health assessment, offers individuals and health professionals important insights.

“By arming people with accurate information, and appropriate treatment and support, they can effectively and efficiently get their lives back on track,” Ms Slocombe said.