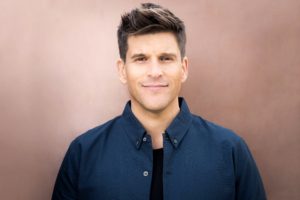 The host of Channel 10’s The Bachelor and member of Brisbane’s HIT 105 breakfast radio team, Osher Günsberg is no stranger to mental illness. He currently battles social anxiety, has been diagnosed with Obsessive Compulsive Disorder (OCD), and has lived with Post Traumatic Stress Disorder.

Osher has first-hand experience of the heavy stigma surrounding complex mental illness, and its ability to prevent those affected from seeking professional help, and ultimately, accessing treatment.

In May 2017, Osher joined the board of SANE Australia as Director in order to shift the community’s attitude towards complex mental illnesses, such as clinical depression, anxiety, schizophrenia and eating disorders.

The TV and radio personality has since been bravely urging all Australians battling a mental illness, including clinical depression, to seek professional help, and treatment. Most recently, he has generously lent his voice to the Australian Genetics of Depression Study.

This is Osher’s story.

In 2006, Osher sought help following the advice from a work colleague who noticed he was struggling. Initially reluctant, he eventually followed up the advice and found treatment for an initial diagnosis of social anxiety disorder. On further investigation after more symptoms presented themselves, he now lives with a diagnosis of Generalised Anxiety Disorder and OCD.

“When a healthy person has a frightening experience, they witness an initial pang of fear, followed by a being in the moment type of fear, and then acknowledgement that the fear is residing.

“For me, living with a mental illness, I experience that initial pang of fear, and then the switch gets stuck on. It can be switched on for no reason, and I will feel utterly terrified,” said Osher.

“My body shudders, and I feel something weird happening in my bowels. My voice gets very shaky, and without my medication, I’m unable to calm down.”

Prior to his diagnosis, Osher had reached a point at which everything, and anything in his life was triggering an emotional response – an extremely difficult situation for him, given his work in the public eye.

Following his diagnosis, Osher began to mount a long road to recovery – a journey he is continuing today.

“It took quite a long time, meeting with lots of different doctors, and trialling multiple different medications and listening to different hypotheses about my illness, before we found a treatment that worked for me.

“Prior to accessing this treatment, and going through the process of figuring everything out, I was using alcohol to mask my illness, and to just get through the day. But eventually alcohol, which had started out as a solution to my problem, became the problem, and I had to give it away,” Osher said.

Today, Osher, who has a family history of mental illness, is living his life in recovery.

“I have tried life without being on medication for my mental illness, and it wasn’t working for me. So today I live my life in recovery, and that’s okay.

“If someone has Type 1 diabetes, they can’t ignore it, by not taking their medicine. For me, it’s the same thing. I live with mental illness and I need medication, and that is fine,” said Osher.

Osher is supporting the Australian Genetics of Depression Study, a ground-breaking international collaboration exploring the genetic risk factors associated with clinical depression, and how genes influence one’s response to treatment. QIMR Berghofer Medical Research Institute is leading the Australian arm of the research, and Osher genuinely hopes by lending a hand, he will allow experts to unravel more answers to help combat the illness.

“I do have a family history of mental illness, and in my experience, and I can only talk to my experience, I’d say I was born with some of this, while some of it is a result of what’s happened throughout my life.

“I’ve experienced two episodes of PTSD in my lifetime, and I have no control over that, so I do think genetics and experiences, in my case, have both played a role in my mental health,” Osher said.

Osher says research, such as the Australian Genetics of Depression Study, is extremely important, as he lives a life for which doctors have worked hard to fine-tune his medication, so that the benefits can outweigh the side-effects. While his medication is working today, he has experienced times throughout his life, where the side-effects of certain medications did cause him some problems.

“This research is working to identify ways to better treat people living with clinical depression individually, to more finely-tune the treatment possibilities, and to give people a chance to act before things get out of hand, which is a really great thing,” said Osher.

“For anyone living with clinical depression, or other complex mental illness, I’d say life is too short to live it in pain, and things can get better. Ask for help, and although it will take a little more work than it might take for other people, the extra work will be worth it,” Osher said.

“And, to anyone who has never lived with mental illness, it’s important for you to know that there are more people in your life than you can possibly imagine, who are living with mental illness, and it is nobody’s fault. So don’t tell them to buck up or feel better, as it’s not always that easy.”