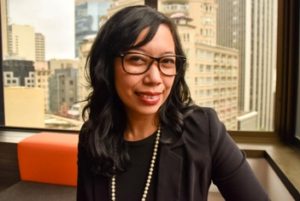 manager, Leola, Sydney was in the bathroom at work, when she collapsed and fell to the floor.

After waking up eight hours later in hospital, Leola was shocked to learn she had experienced a near-fatal brain aneurysm – a terrifying ordeal which would soon lead to a diagnosis of Post Traumatic Stress Disorder (PTSD).

Following her discharge from hospital, Leola began to experience severe mood fluctuations, swinging from happiness to fury within a matter of seconds. She then became plagued by suicidal thoughts, deeply questioning why she had survived her brain aneurysm.

In early 2011, while desperately grappling to come to terms with her highly emotive state, Leola visited a psychiatrist, who subsequently diagnosed her with clinical depression.

“Depression is like a cloud of darkness that sets on you. It’s similar to being stuck at the bottom of a well and not knowing how to escape,” said Leola.

The self-described “highly strung” woman, who for years had been plagued by anxiety and perfectionism, was further traumatised by her life-threatening aneurysm experience.

“After my aneurysm, everything changed for me. I would get extremely upset at the simplest of things, such as the TV remote control being in the wrong place.

“My emotions fluctuated from happiness to fury in an instant. My life had become so unbearable that I had no other choice but to seek professional help,” Leola said.

At the recommendation of her rehabilitation doctor, Leola met with a psychiatrist, who diagnosed her with clinical depression, and prescribed anti-depressant medication.

“I’m not really a talker, particularly when it comes to my emotions.

“But I did see a psychologist for a few sessions, and we discussed my poor mental health at the time,” said Leola.

“The psychologist explained that I was a perfectionist, and that my emotions had been heightened by my recent, traumatic health experience. She armed me with a few techniques to help me stop boiling over.”

Over time, Leola chose to discontinue visiting a psychologist, but continued to take her antidepressant medication sporadically.
“I’ve been on antidepressants for the past six years, but for a long time I took them sporadically, and various people, particularly my husband, whom I was dating at the time, noticed the difference.

“Although I didn’t feel any different when I was on the medication, if I stopped taking it, my husband would recognise it immediately, because my whole demeanour and personality would change, as I strove to reach a higher level of perfectionism,” Leola said.

Over time, Leola became engulfed by emotions and utter exhaustion, and in December 2016, her brain mimicked a stroke. She was rushed to emergency and spent the ensuing three days in hospital.

“Nowadays, I visit a psychologist regularly, and take my antidepressants every day.

“I’m still very busy, but am working to control my emotions so I don’t end up back in hospital again,” said Leola.

“I’m seeing a new psychologist, and we talk about me being like a pot that has a lid on, which is ready to boil over at any point in time. It’s a metaphor that works well for me because I’m an eager cook.

“My psychologist and I are working on me being mindful of my emotions, and acknowledging them, rather than bottling them up, which I have a tendency to do,” Leola said.

Leola got married in August 2016 to a wonderful man who has been instrumental in supporting her recovery from depression.

“My depression, and associated behaviours, nearly cost me my relationship at times. But I’m fortunate to have found a very good man who is supporting me through recovery.

“Prior to living with depression, I was a socialite. I enjoyed going out and socialising with friends, and many others. But I’ve since become somewhat reclusive. So support from my husband and friends is extremely important to me,” said Leola.

“Depression does not necessarily mean that you’re in a constant state of sadness. Personally, I tend to fluctuate between sheer happiness and sadness many times a day, which makes me question myself and my behaviour.”

Leola is participating in the Australian Genetics of Depression Study, a ground-breaking international collaboration exploring the genetic risk factors associated with depression, and how genes influence one’s response to treatment. QIMR Berghofer Medical Research Institute is leading the Australian arm of the research study, and Leola genuinely hopes her contribution will allow experts to unravel more answers to help combat depression.

“I think depression is a combination of genetics and environment. I believe the environment can play a big role in triggering depression for those at risk of the illness.

“For me, the trauma of experiencing a brain aneurysm exacerbated my already highly emotional state. It was like a magnifying glass for my emotions, which in my case, triggered the depression,” Leola said.

“The Australian Genetics of Depression study is examining the genes associated with depression, to determine whether an individual is predisposed to the illness due to their family history, in order to help prevent the onset of depression.

“Anyone who has experienced depression, or is living with depression, should volunteer for this ground-breaking study to help researchers unlock the genetic key to this illness,” said Leola.

Join Leola, and participate in the Australian Genetics of Depression Study today – http://www.geneticsofdepression.org.au/