Single mother, childcare teacher and student, Katy, 29 from Lakelands, Perth, was tormented by 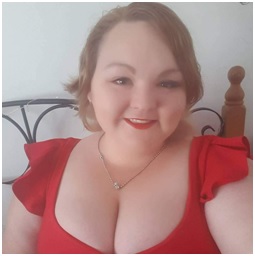 In 2011, she attempted to take her own life – a terrible incident that threw Katy into the arms of professional help.

Subsequently diagnosed with depression and borderline personality disorder, Katy spent the ensuing three years swinging on life’s pendulum, until the birth of her daughter in 2014, which offered her a new lease on life.

Katy is participating in the Australian Health and Genetics Study and is “learning to live with depression.”

“After my failed attempt at suicide, I woke up a few days later in ICU and was immediately referred to the hospital psychiatrist.

“The psychiatrist suggested I was living with depression and borderline personality disorder, and prescribed some medication to help manage my condition, and placed me on a waiting list for a local mental health clinic,” said Katy.

The medication served as “a crutch” for Katy, but also knocked her out, and left her “feeling like a zombie.”

At the time, Katy was in a dysfunctional marriage to a man who was living with epilepsy. She was working demanding open shifts at a childcare centre, and was required to commence work early in the morning. However the medication she was taking made it difficult for her to rise. So she often arrived late at work, struggling to keep her eyes open. Eventually Katy chose to quit her job, citing her husband’s chronic condition as an excuse.

After a year-long wait, Katy was accepted into a local mental health clinic, and placed in the care of a psychologist.

“By the time I presented to the psychologist in 2013, my life was in utter chaos. I was struggling with depression and borderline personality disorder. I was in a loveless marriage, abusing drugs and having regular affairs for self-affirmation. I trusted no one,” Katy said.

Fortunately for Katy, despite expecting rebuke and judgment, she mustered up the courage to disclose her deepest secrets to her psychologist. To her surprise, the psychologist listened to her story and offered empathy, support and information to help Katy better understand her condition.

“The psychologist really helped me. I was able to trust, and form a healthy, supportive relationship with her. I still see her today, and she is continuing to aid my recovery,” said Katy.

At the same time however, Katy’s marriage was on a downward slope. She and her husband were living in his step-father’s caravan, and regularly abusing drugs, which was compromising Katy’s recovery.

After a few blow-ups with her then husband, Katy chose to leave, and relocated to her parents’ house.

“My husband and I separated after I left the caravan because our relationship was so toxic. He had no interest in trying to save our marriage, so I waited a year, and then filed for divorce,” said Katy.

In the comfort of her parents’ home, and with ongoing professional support from her then psychologist, Katy began to detox from the cocktail of drugs she had been using, and commenced a dialectical behavioural therapy (DBT) course.                                   Over time, she began to recognise positive changes to both her mindset and behaviour.

In early 2014, in the second year of her DBT course however, she lost her coach, and was left with fill-in teachers whose lack of knowledge of the area left her feeling disgruntled and disturbed. So she soon chose to leave the group, and began to slip into old behaviours triggered by her then declining mental health, including having multiple affairs.

In March, 2014, Katy was shocked to learn she was five months pregnant.

She subsequently identified and approached several men who could have been her baby’s potential father, to no avail. All chose not to accept any responsibility for the unborn child.

Post- birth, Katy continued to discuss her depression with her psychologist, who chose to work with Katy, one-on-one, through the remainder of her DBT treatment.

“Since giving birth, and continuing to work with my psychologist, I’ve been able to focus on my recovery.

“My daughter has allowed me to realise that I’m not only living for myself today, but for her as well, as I continue to work through the darkness of my depression,” Katy said.

“To me, depression involves feelings of hopelessness and emptiness. Fortunately nowadays, I can recognise these feelings and work through them.”

Katy is participating in the Australian Genetics of Depression Study, a ground-breaking international collaboration exploring the genetic risk factors associated with depression, and how genes influence one’s response to treatment. QIMR Berghofer Medical Research Institute is leading the Australian arm of the research study, and Carly genuinely hopes her contribution will allow experts to unravel more answers to help combat depression.

“I think depression is a combination of genetics and environmental factors.

“I think depression is passed down through the family, whereby genes can predispose you to the mental illness, but environmental factors can trigger it. The genes can be influenced by who, or what is surrounding you,” said Katy.

“With knowledge, DBT and medication, I have learned to live with depression.

“The Australian Genetics of Depression study is an excellent study examining the genes associated with depression, in order to determine whether an individual is predisposed to the illness due to their family history, to help prevent the onset of depression,” Katy said.

“Those who are living with, or have experienced depression, should volunteer for this groundbreaking study to help researchers unlock the genetic key to this mental illness.”

Join Katy, and participate in the Australian Genetics of Depression Study today – http://www.geneticsofdepression.org.au/