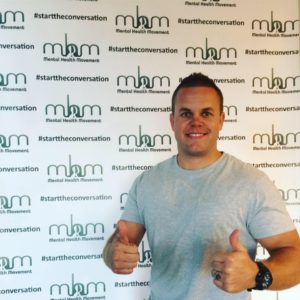 Dan has continued to partner with the NRL in retirement, as its State of Mind community and mental health ambassador.

In April 2016 Dan founded the Mental Health Movement, which encourages “people to take the first step in being the change this world needs” by joining his movement and starting a conversation. Dan targets community groups, industry, schools and corporates with his movement and tells his personal story to remind himself of his past.

By sharing his personal, lived experience with mental illness, Dan strives to educate the public and ultimately, reduce the stigma associated with mental illness that prevents many from people seeking the help and advice they so urgently require.

This is Dan’s story.

Growing up in Dapto, on the south coast of NSW, Dan dreamed of playing rugby league.

During this period, Dan, his mother, two brothers and sister alike were all subjected to domestic violence. At the time, Dan was unaware of the significant impact this would have on his life.

Following his graduation from high school, Dan was drafted into the St George Illawarra Dragons, a first-grade NRL team, and in 2007 made his debut as a professional rugby league player.

Soon, Dan found himself playing every game with the Dragons, until he ruptured his Achilles tendon in 2010, requiring surgery. That year the Dragons went on to win the premiership, but Dan had to watch from the sidelines – a devastating experience which hit Dan “like a tonne of bricks”.

Following his surgery, Dan was treated with a string of pain-killing medications, which, for the ensuing six to eight months, he abused, to mask not just the physical pain, but also the emotional pain he had been battling since childhood.

Observing his out-of-character behaviour at the time, his coach, Wayne Bennett, approached Dan and asked whether he was okay. This marked a turning point for Dan, who was finally able to explain that he was not okay, and required help.

The following day, mental health organisation, The Black Dog Institute met with his team. Two weeks later Dan met with several psychologists and physiologists at The Black Dog Institute in Randwick, Sydney, and was diagnosed with Bipolar 2 disorder – a mental illness characterised by extreme, uncontrollable changes in mood (ranging from elevated to depressed moods), thought, energy and behaviour.

“When I was diagnosed in 2010, by the Black Dog Institute, I started to access a lot of different treatment methods, from meeting with psychologists and psychiatrists, to using different antipsychotic and mood- stabilising medications, which I took for a period of nearly five years from 2010,” said Dan.

“Today, I am nearly three years medication free, but I am thankful that the medicines were there when I needed them.”

Further to accessing medication, Dan was treated with various different techniques, including Cognitive Behavioural Therapy (CBT) and Schema Therapy, to aid his recovery.

For Dan, the medication was very beneficial, but deep down he knew that weaning himself off the medication to self-manage his illness would aid his recovery. So he set this as his goal, working closely with his psychologist and psychiatrist to come off of medication when ready.

“I got to the point where I had gone to TAFE and studied community services, mental health, AOD (alcohol &other drugs) and I work well when I challenge myself. So I spoke to my psychologist and psychiatrist about how to best manage my condition without medication, as I wanted to challenge myself to see whether I could do that,” Dan said.

“Today, I am managing my illness without medication, but I’m always very open to the fact that should I ever get back to a point where I need medication to manage my bipolar disorder, I will take it.”

At the height of his illness, Dan felt alone and isolated, given his access to information back then was not readily available. This left him feeling vulnerable and fearful, and growing increasingly concerned about displaying weakness by requesting help.

“When I was struggling with my mental health, I often felt alone. I didn’t know where or how to get help.

“I had no understanding of mental illness, and was scared to ask for help, because I thought it was a sign of weakness,” said Dan.

Dan, when he played for the St George Illawarra Dragons

“In retrospect, I wish I had asked for help sooner.

“I don’t want others to experience what I went through. I want to empower people with knowledge and acceptance of how to ask for help,” Dan said.

“Knowing what I know now, I suspect I lived with bipolar 2 disorder for as long as I can remember. Years before I was diagnosed in 2010, I was very volatile,” said Dan.

“I have a family history of mental illness – close members of my family have lived with clinical depression, bipolar disorder and other mental illnesses.

“Having come through it, I am now working to be the best version of myself. I have a six-month-old son, and recently, when I was speaking with a psychologist, I enquired as to what would happen if he too, develops a mental illness, and she said, ‘he’s got the best teacher to guide him, and support him through the process,’ which was great for me to hear,” Dan said.

“The Australian Genetics of Depression Study is really important, because it will help to provide a scientific base and credibility to the illness. This research will help determine the causes of clinical depression, in order to improve our understanding of the illness, which is excellent,” Dan said.