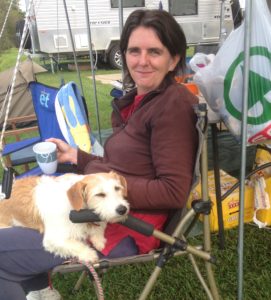 throughout Australia with her family.

Recently, Becky battled with her second major episode of clinical depression, 18 years after recovering from her first experience with the illness.

Becky’s first experience with depression occurred when she was 28 years old. She was working as a high school teacher, and had grown accustomed to keeping herself busy.

However, that year, Becky contracted glandular fever and was extremely tired, but couldn’t sleep well. She lost weight, had nausea and just felt genuinely rotten.

Becky was regularly visiting her doctor, but nothing physical showed up.

Soon, Becky became aware that her thoughts and emotions were constantly negative, and in time she was diagnosed with clinical depression.

“I actually had three months off from work and my mum had to look after me,” said Becky.

“For me, depression came on suddenly. When I contracted glandular fever, and couldn’t keep myself busy, it hit me like a truck.

“Depression was like a feeling of nothingness. It feels like a black hole at its worst and you can’t see the light at the end of the tunnel,” Becky said. You are not connected to anyone or anything.

As a result of her decreased mood, and the physical symptoms, Becky went to see her GP, who diagnosed her with clinical depression. When the doctor first mentioned depression and antidepressants she was really stunned and thought it couldn’t be real. She actually thought she was dying of a brain tumour or cancer. She refused antidepressants at first, but due to no improvement after a couple of months she starting taking some antidepressant medication,  along with a seeing a wonderful counsellor, which  assisted her recovery.

“The first time, I recovered really well. It only took me a few months and I was able to go back to work,” Becky said.

And for the next 18 years, Becky was able to keep the black dog at bay, however around 2010 Becky, then aged 40, experienced her second episode of severe depression.

For Becky, this episode was much more difficult than her first experience, and her recovery process took a lot longer than a few months. She does not like to think about that period of her life which was so difficult.

“I felt a bit psychotic in my second bout. I thought my body was wasting away,” said Becky.

“I had lost a lot of weight, and my anxiety was so severe. During this episode of depression, I spent three weeks in a Mental Health facility in Armidale.”

When she went home she had suicidal thoughts of taking pills, which she describes as a really frightening experience.

Despite the road to recovery taking a number of years for Becky on this second occasion, she attributes much of her recovery to the people she had around her. This included her psychiatrist, her counsellor, her family and friends, including a close group of friends, who have always been there for her to talk about depression.

“I saw a really good psychiatrist and an excellent counsellor the second time around. My husband stuck by me. I was put on medication again which helped over the years,” Becky said. There was no quick fix but years of recovery. Having a beautiful family and helping in the community has really been a great aid to dealing with depression.

Further to this, Becky’s enthusiasm for physical activity played a role in her recovery process.

“I would walk every day. I could walk down to the front of our farm and back and even that was enough,” said Becky.

Today, Becky describes herself as recovered, and she advocates against the stigma associated with depression.

“I don’t think people know what to do for people with depression. If someone says they have cancer, we cook and we do anything possible to help. With depression, a lot of people still don’t understand what it actually is,” Becky said.

“Part of healing is being open about it. It’s part of coming to grips with it. It’s an illness and it can hit anyone but people don’t treat it like they do with cancer.”

For Becky, her first bout of depression came as a huge shock even though there are family links to alcoholism and depression.

Becky is participating in the Australian Genetics of Depression study, a groundbreaking international collaboration exploring the genetic risk factors associated with depression, and how genes influence one’s response to treatment. QIMR Berghofer Medical Research Institute is leading the Australian arm of the research study, and Becky genuinely hopes her contribution will allow experts to unravel more answers to help combat depression.

“I think the familial link is strong with me and there’s definitely a genetic basis for depression. I don’t consider myself having had many bad things happen to me in my life, and yet I have lived through depression. It could explain why do some people get it and some people don’t. There must a reason,” Becky said.

Join Becky, and participate in the Australian Genetics of Depression Study today – https://www.geneticsofdepression.org.au