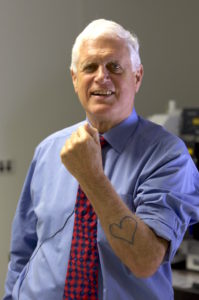 Geneticist and Head of the Genetic Epidemiology Laboratory, QIMR Berghofer Medical Research Institute and Lead Investigator of the Australian Genetics of Depression Study, Prof Nick Martin, Brisbane, has this week thrown his support behind the human-led, human-grown ‘Heart On Your Sleeve’ Movement.

The social media movement, ‘Heart on Your Sleeve’, is the brainchild of 27 year old Sydney-based mental health advocate and social entrepreneur, Mitch Wallis, who has battled mental illness, including clinical depression, Obsessive Compulsive Disorder (OCD), and anxiety for much of his short life.

By kick-starting the Movement, Mitch aimed to reduce the stigma associated with mental illness among Generation Y, and to heighten public awareness and understanding of its epidemic proportions, citing “as a society we have raised awareness of mental health issues, but the stigma is still very strong. We need to make a change. It’s time we move from thinking “it’s OK to talk”, to actually believing it, and owning our story.”

By “wearing his heart on his sleeve”, Prof Martin is visibly demonstrating his commitment to heightening public awareness and understanding of mental illness, in order to reduce its surrounding stigma.

As a geneticist, Prof Martin and his team of researchers at QIMR Berghofer Medical Research Institute, are working around the clock to identify the genetic risk factors associated with clinical depression, and how a person’s genes influence their risk of developing depression, and subsequent response to treatment, in order to create better treatments, and ultimately, find a cure for the devastating illness.

“The link between genetics and clinical depression is very clear. Approximately 20 thousand genes make up the human genome. There are genes that cause clinical depression, but right now, we don’t know what they are. What we do know, however, is how to find them. We just need a large enough study performed the right way, to be able to identify them.

“Through our Australian Genetics of Depression Study, we will most likely be able to identify between 50 to 100 of these genes that are influencing a person’s risk of developing clinical depression.

According to Prof Martin, genetics represents the best way of solving complex traits, such as clinical depression, because genes can help determine what’s gone wrong.

“When your car breaks down, the first thing you do is to try to determine what’s gone wrong. Only then, can a mechanic fix the problem.

“It’s exactly the same with diseases.  We need to find out exactly what’s gone wrong, and only then can we design a drug or some other treatment that can address the problem directly,” said Prof Martin.

Prof Martin maintains “it’s OK to not be OK, and the time has arrived to remove the stigma surrounding mental illness.

“Through my research, I will continue to strive every day to support those living with mental illness, by developing improved treatments, and one day, finding a cure for clinical depression.

Should you wish to make a small contribution to take part in our Australian Genetics of Depression Study, please head here.

To learn more about the ‘Heart on My Sleeve’ movement and to get involved, head here.