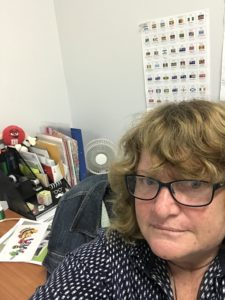 Mother, administrative assistant and animal lover, Ann, 55, Gold Coast, first experienced depression as a child but wasn’t diagnosed until she was 25 years old.

Struggling to cope with her father’s suicide when she was just ten years old, Ann always preferred her own company and would go weeks without talking to anyone at all.

With depression such a taboo subject all those years ago, Ann had to leave numerous jobs as a result of nervous breakdowns, and she endured a whole year of post-natal depression after the birth of her daughter.

Now enjoying life more than she ever has, Ann has put processes in place to make sure she never has to go through periods of depression again.

This is Ann’s story.

“I found school really tough. I could go from being one of the top students to near the bottom of the class. I wasn’t prepared for life outside of school. As much as I wanted to pursue further education, I didn’t think I could hold it together to make a success out of it,” said Ann.

“I was put on an anti-depressant medication for a short time as a four-year-old. I was socially awkward through all of school. I could go for weeks without talking to anyone. I was reluctant to leave the house outside of school.”

At 25, Ann finally received advice from her Church Pastor, who insisted that she went to see her local GP to seek help for how she was feeling.

“The effects of my depression have, at times, been debilitating. Primarily, I felt a state of hopelessness. But then there were also times of ambivalence, ” Ann said.

“I would be unable to connect with my own feelings, let alone anyone else’s. And then there were times when I was overwhelmed with feelings, both internally and those caused by the people around me.

“Like everyone else, there have been events that have been traumatic in my life, but it’s hard to say how much of an impact these have had. When I first spoke to a GP about depression there had not been a specific event that had brought on that episode. I just felt overwhelmed with life.”

Looking back, Ann recognises the impact her depression had on her friends and family, with a number of her family members having been affected by the illness too.

“My father committed suicide when I was ten after living with depression for as long as I had been aware. My siblings have been on anti-depressants at least once in their lives, and my daughter is also on anti-depressants,” said Ann.

“It’s been hard on my family and friends. When I did feel brave enough to talk about depression, I was approached by well-meaning friends who would freely give advice such as ‘just get over it’ or ‘go and get a job’.

Now fully recovered, Ann recognises that she couldn’t have reached the happier place in her life that she is in today, without the support of her network of friends and family.

“I’ve become better at recovery with each episode. Initially, 30 years or so ago, depression wasn’t so well accepted by the population. It was a big deal to admit I had a mental health problem,” Ann said.

“At least now it’s easier to talk about. I now know the signs and don’t hesitate to go to my doctor. I make use of counselling and psychological services when needed.

“I also rely heavily on my immediate family and a close group of friends for support. I would not be doing so well without all of these people in my life.”

Today, Ann is participating in the Australian Health and Genetics Study (AHGS), a ground-breaking international collaboration exploring the genetic risk factors associated with depression, and how genes influence one’s response to treatment. QIMR Berghofer Medical Research Institute is leading the Australian arm of the research, and Ann genuinely hopes her contribution will allow experts to unravel more answers to help combat depression.

“The brain is an organ, as is the heart, so if the heart can have genetic defects then it stands to reason that the brain can also. Nurture and the environment always play a significant role but there is so much we don’t know,” said Ann.

“This important study is well worth doing. I hope the information the trial will uncover will help with understanding the condition better, and provide improved treatments in the future.

For now, Ann is making the most of life, which includes taking her beloved dog on regular walks, as well as enjoying a keen interest in arts and crafts and playing video games.

“I don’t fear a recurrence of my depression. I feel I have the right systems and people in place to help me through should depression return. I love my life at present and wouldn’t want to give fear a place.”