At 23-years-old, fitness instructor, personal trainer (PT), and outdoor enthusiast, Annie** is a driven young woman, who boasts a passion for health and fitness. 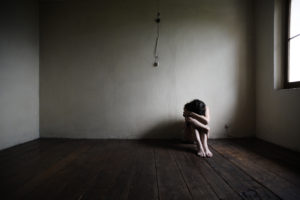 In July 2011, at the age of 20, Annie started her own personal training business, renting space out from a gym in Melbourne, as well as coaching sport and studying full-time.

Eager to excel, Annie describes herself as someone who is always busy. After 6 months of having far too much going on at once, her enthusiasm began to diminish, her mood decreased, and she found herself constantly getting ill.

“It felt like I was just getting illness after illness, and depression just happened to be one of them,” Annie said.

The massive shift in mood, decreased enthusiasm, and increased struggle completing daily tasks made her and her family concerned.  She continued to experience intense negative emotions and recognised that something was wrong, so with the support of her friends and family, she organised an appointment with her GP.

After describing her symptoms to her GP, Annie was referred to speak to a psychologist. They recognised her symptoms as clinical depression and prescribed her a course of antidepressant medication.

“I lost my desire to do anything. At my lowest points, I started to wonder why I was alive, and continually found myself questioning any reason to continue living.”

“When I was diagnosed, I was under a lot of pressure and stress. The doctor explained that the long-term stress was too much for my body to handle, ultimately causing the chemical imbalance in my brain – which is how my depression came about.” Annie said.

“As a result of my depression and my low immune system, the slightest bit of too much stress would cause me to become ill and I would often find myself going through really dark periods of severe depression despite the medication. The combination of depression and my ill-health led to me cutting back at university to part-time study and only being able to cope with 4 hours of work a week initially.”

Despite battling with depression and struggling with her health, Annie maintained a strong support network with her friends and family. They were there for her during the hard and dark times, and helped her on her process of recovery.

“I was lucky in that I had a lot of support from those around me. To a degree it was them who kept me fighting through each day to not give up, I really wouldn’t have made it through if I didn’t have so much support through the process,” said Annie.

As she continued on her path to recovery Annie was able to gradually take on more work each week, however the increased levels of stress with her studies meant that she had to increase the dose of antidepressants on two occasions.

Mid-last year, with one semester left of her degree, she decided to speak with a psychologist again when she found herself having to increase her dose again.

“I learned a lot from the psychologist. One of the main things was to be aware of what thoughts were going on in my mind, and taking note of when I distorted thoughts by using words like ‘always’ or ‘never’ for example.”

“The stress coping mechanisms that I was taught by the psychologist helped a great deal, helping make me aware of when I would slip into a depressed state and how to overcome it or deal with it if it happened; and with the continued support of my friends and family, the psychologist and the medication, I actually finished the last semester of my degree without getting ill once or missing a class!” Annie said.

Annie is participating in the Australian Genetics of Depression study, a groundbreaking international collaboration exploring the genetic risk factors associated with depression, and how genes influence one’s response to treatment. QIMR Berghofer Medical Research Institute is leading the Australian arm of the research study, and Annie genuinely hopes her contribution will allow experts to unravel more answers to help combat depression.

“Depression has stemmed throughout much of my family, although it was often situational. My mum experienced clinical depression when she emigrated to New Zealand from South Africa at a young age. Many of my older relatives have also battled depression, some as much as post-traumatic stress disorder as a result of violence experienced in their lifetime,” said Annie.

“I think a study like this is a great idea, and I am really happy to be involved as I hope that in some way I can help other people the way that people have helped me, and I see this study as a way to do that.

“I don’t know if there is a genetic link or not, but I am fascinated to find out more about it. For me, I think that there could have been a genetic link which predisposed me to being more susceptible to depression, however I think it was mainly a result of chronic stress and the lack of stress management skills which ultimately led to me becoming depressed,” Annie said.

Today, Annie is continuing her recovery from clinical depression, and is weaning herself off of her medicine slowly.

“Currently, I am in a bit of a tough place, as I am in that imbalance period again due to weaning off, but I am focusing on using the coping mechanisms I’ve been taught and I’m seeing the psychologist during this process when I feel like I need to work through more elements. It will still be at least a year before I’m off the medication altogether but I’m looking forward to the point where I’m not dependent on the medication anymore to feel mentally stable,” said Annie.

Join Annie, and participate in the Australian Genetics of Depression Study today – http://www.geneticsofdepression.org.au/

**Name has been changed to protect identity.