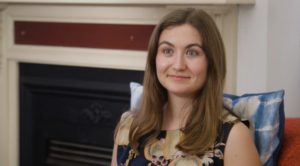 Anna was diagnosed with depression during her first year of university, aged 19.

“I was at college and I remember not connecting with anyone. I remember leaving college at night after completing all of my studies, and going for a run to the lake in Canberra, and just crying for hours and hours every night,” said Anna.

“I’ve always been a really positive, bubbly, extroverted person, but I no longer wanted to see people because I thought I was just going to be a burden to them.

“I remember being on the bus one time, and seeing a very old childhood friend whom I was really close to. I ducked down in the seat so that she wouldn’t see me because I thought I would ruin her day if she saw me, because I was such a burden to everybody,” said Anna.

Having concealed her feelings from her family for some time, a subsequent visit to a naturopath in Byron Bay eventually prompted Anna to seek professional help for her depression.

“The naturopath clued in on something. He told me I was the saddest person he’d ever seen. My mum was in the room, and I just broke down, and I had to tell her and my dad,” Anna said.

Anna later learned that her father had also experienced depression when he was 19 years of age, along with her grandmother, who had experienced post-natal depression. However, Anna maintains her depression was more severe in comparison to her immediate family members.

Nowadays, Anna considers herself recovered from clinical depression. She is participating in the Australian Genetics of Depression Study, a groundbreaking international collaboration exploring the genetic risk factors associated with depression, and how genes influence one’s response to treatment.

QIMR Berghofer Medical Research Institute, Brisbane, is spearheading the Australian arm of this international study, and Anna genuinely hopes her contribution will lend clinical researchers further insights that will allow them to ultimately find a cure for the debilitating illness.

“I think genes probably do play a role in depression based on my own family history. But I would caution anybody to feel that because they are genetically predisposed to depression, that they are going to live with the illness for the rest of their lives.”

“I’d really encourage adults who have had depression, or are now living with depression, to jump online, do the questionnaire and get the [saliva] kit, because it could make such a big difference to the future lives of other people who are genetically at risk of the illness,” Anna said.

You can watch Anna’s story here:

You can watch more of Anna’s extended story here:

To join Anna and other Australian volunteers participating in the Australian Genetics of Depression Study today, head here: http://www.geneticsofdepression.org.au/